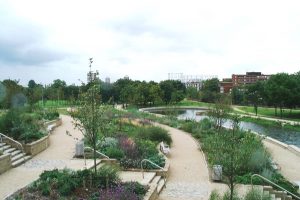 A record eight parks in the borough were named as the some of the best open spaces in the country in the 2012 Green Flag Awards. St George’s Gardens and Bromley Recreation Ground won Green Flags for the first time, while King Edward Memorial Park regained the Green Flag it last held several years ago. Mile End Park (see photo left) and Trinity Square Gardens (above) retained their awards, along with Weavers Fields, Millwall Park and recently-refurbished Victoria Park. Tower Hamlets Cemetery Park, managed for the Council by the Friends group, won a Green Flag Community Award for the first time.

Green Flag awards are given annually in recognition of exceptional high quality green public spaces. Biodiversity is one of the factors taken into account in judging, and to retain Green Flags, parks must improve from year to year, ensuring ongoing benefits for the borough’s biodiversity. The Tower Hamlets parks join over 1000 open spaces up and down the country, ensuring more of us now have access to well-managed, high-quality green spaces.

Mayor of Tower Hamlets, Lutfur Rahman said: “Parks and open spaces are an important part of our community providing essential recreation, play and leisure facilities I am delighted that so many of our parks have retained Green Flag status. The refurbishment of Victoria Park was a once in a life-time opportunity to bring a much loved park up to date and the multi million pound transformation will ensure the park continues to provide excellent facilities for years to come.”

All award-winning parks now have the chance to receive a further award from the Green Flag Plus Partnership – the People’s Choice Award. Victoria Park is looking to make it two years in a row as the capital’s favourite park. To vote for Victoria Park or any of the Tower Hamlets parks visit the Green Flag Award website now to register.

The borough scored further success in the 2012 London in Bloom awards, winning a Silver Gilt Award. This is the second highest award, and the borough’s parks only narrowly missed out on Gold. The scores for horticulture and gardening were good enough for Gold, and the borough scored an impressive nine out of ten in the “conservation and biodiversity” category, which looks at wildlife areas and natural habitats.

This website uses cookies to improve your experience while you navigate through the website. Out of these, the cookies that are categorized as necessary are stored on your browser as they are essential for the working of basic functionalities of the website. We also use third-party cookies that help us analyze and understand how you use this website. These cookies will be stored in your browser only with your consent. You also have the option to opt-out of these cookies. But opting out of some of these cookies may affect your browsing experience.
Necessary Always Enabled
Necessary cookies are absolutely essential for the website to function properly. This category only includes cookies that ensures basic functionalities and security features of the website. These cookies do not store any personal information.
SAVE & ACCEPT